Canadian Mormon teenager, 19, begged her parents to buy her a plane ticket home before she was stabbed to death by British boyfriend, 23, she had met online
C 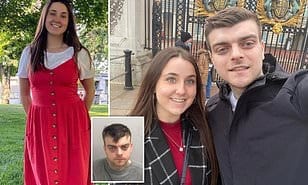 The family of a Canadian teenager who was murdered by her ‘possessive’ British boyfriend have revealed she had begged her relatives to buy her a plane ticket home before she was brutally stabbed to death, Your Content has learned.

Jack Sepple of Chelmsford, Essex, admitted to murdering his Canadian girlfriend during her ‘trip of a lifetime’

Couple met on a dating app, with Ashley moving across the Atlantic after seeing pictures of boyfriend online.

But she had begged relatives to buy her a ticket home and spoke of Sepple’s ‘jealous and abusive’ behaviour.

He was found by police lying in bed next to her dead body just two weeks before Valentine’s Day,‘according to The SUN.