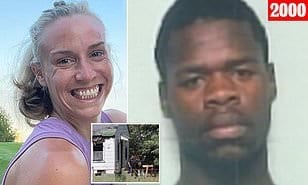 Court documents reveal that violent felon Cleotha Abston was previously convicted of raping a man when he was a teenager – as new footage show the alleged killer cleaning his SUV hours after billionaire heiress Eliza Fletcher vanished, Your Content has learned.

New video has emerged showing the suspect in the kidnapping and murder of Eliza Fletcher, a mother of two, cleaning out his car following her disappearance.

The video shows suspect Cleotha Abston, 38, driving to his brother’s home and spending time standing by the passenger side of his SUV.

The footage was shot less than four hours after Fletcher’s disappearance on September 2, with Abston driving her round for an hour and a half.

Authorities announced on Tuesday that Fletcher’s body had been found after an exhaustive search and that Abston had been charged with murder.

Records show that he was previously arrested for raping a man and several assaults before he turned 16, when he was jailed for 22 years after kidnapping a lawyer,‘according to FOX.