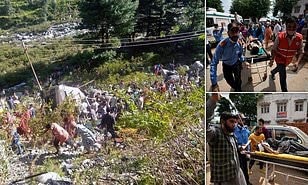 At least 11 people have been killed and 29 injured after an overcrowded minibus carrying school children plunged down a steep gorge in northern India, Your Content has learned.

Nearly 40 people, including a number of students, were crammed into minibus.

Bus veered off the road and plunged 250ft down gorge near village in Kashmir.

Nine people were killed on the spot and two others died later in hospital.

At least 29 people were injured and they are in critical condition following crash,‘according to FlipBoard