Smirking in the dock: Married Democrat official stands in Vegas court with his arms bandaged after suicide attempt – as he’s arraigned for murdering journalist who exposed his affair with co-worker
S 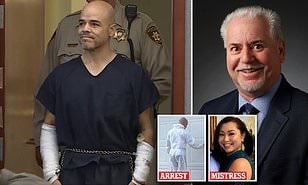 A smirking Democratic official has appeared in court charged with the murder of a Las Vegas journalist who exposed his affair, Your Content has learned.

Telles appeared in front of a judge today smirking and nodding during the short hearing with his arms bandaged from a failed attempt to take his own life before he was arrested,‘according to The New York Post.