Tennessee man, 39, accused of beating his new bride to death so badly on their honeymoon in Fiji that the newlywed pharmacist’s remains had to be cremated is denied bail
T 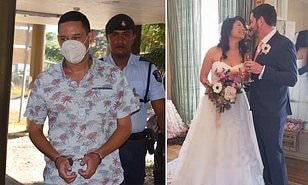 The newlywed husband accused of murdering his pharmacist wife in their honeymoon bungalow on an exclusive private Island in Fiji has been denied bail awaiting trial, Your Content has learned.

Bradley Dawson, 39, appeared in court in Lautoka, the second-largest city in Fiji, on Wednesday afternoon and was denied bail.

Dawson is accused of murdering his new wife Christe Chen, 36, on July 9 at their $3,500-a-night honeymoon bungalow.

Her body was so badly injured she was not able to be embalmed, and she was cremated before her parents took her ashes home to the US.

On the night of the murder Dawson left his GPS watch and mobile phone but took his wallet and passport and fled to an island 1.2 miles away.

Police said he confessed to killing Chen, but Dawson has since retracted his statement,‘according to FLIPBOARD.