Female ‘human trafficker smuggled HUNDREDS of migrants across US border for $15,000 each over six months’: Cops arrest Arizona woman, 24, after tipoff that she was holding multiple people for ransom
F 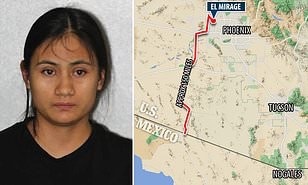 A suspected human trafficker has been arrested for smuggling hundreds of migrants into the United States – and charging them each as much as $15,000 before allegedly holding them ransom in her Arizona home, Your Content has learned.

24-year-old Tania Estudillo Hernandez is accused of smuggling hundreds of migrants into the U.S. over the course of at least six months.

Estudillo Hernandez is believed to have charged the migrants up to $15,000 U.S. dollars each to get them into the country.

Police executed a search warrant after a call came in reporting that people were being held for ransom inside an Arizona home.

While surveilling the house, officers observed the woman leaving with a person, later identified as a Guatemalan national.

The woman was arrested and is currently being held at the Maricopa County Jail,‘according to New York Post.