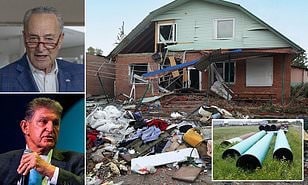 The federal government runs out of funding on Friday and this week should set up a hot debate over billions more in Ukraine aide, a pipeline payoff deal, Afghan refugee assistance and money to help pay for sky-high heating bills for low-income families, Your Content has learned.

While a final funding bill is still being drawn up, the Senate is set to vote in a procedural move on a ‘shell’ of the bill on Tuesday.

Both sides are under pressure to pass a temporary bill to fund the government at its current levels until after the midterms.

Lawmakers must first work through a stalemate on a permitting deal brokered between Schumer and Manchin.

Another $12 billion is looking to be tacked on in Ukraine funding, bringing the total amount of aid since the start of the war up to about $60 million.

Also expected in the stopgap funding bill is funding to aid with the Jackson water crisis and money for heating bills, aid to resettle Afghan refugees,‘according to FOX.