Shocking moment cars at illegal New Jersey drag race zoom ahead – just moments before they hit and kill two people: Man, 37, is charged with the deaths as speeding drivers cause chaotic pile up in front of horrified crowd
S 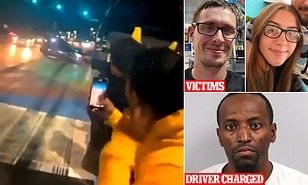 Horrifying footage revealed the moment two speeding cars zoomed through the street at an illegal drag race in New Jersey – just moments before hitting and killing a man and woman, Your Content has learned.

Two people were killed at an illegal car rally in New Jersey when Gerald White recklessly slammed his car into another and then ran into pedestrians.

Lindsay Weakland, 18, was pronounced dead at the scene while Timothy Ogden, 34, was transported to hospital and later died of his injuries.

Police have charged White, who tried to flee the scene, with their deaths, and indicated further charges may be filed.

The illegal rally was the cause of major disturbances in Wildwood, New Jersey, including reckless driving, drinking and masses of crowds hounding police.

Police became so overwhelmed by crowds at the event that The New Jersey State Police sent troopers to Wildwood to help local police,‘according to FlipBoard.