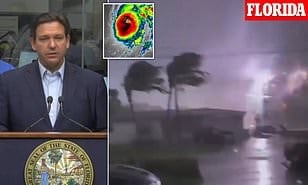 Huge waves and a ‘catastrophic’ storm surge has hit the southwest Florida coast as the ‘extremely dangerous’ eye wall of Hurricane Ian moves onshore lashing the state with up to 12 inches of rain, Your Content has learned.

Hurricane Ian has been declared a Category 4 storm as it’s eye moves onshore to the west coast of Florida but could become a Category 5 as it inches closer to landfall.

Devastating winds and flooding have hit the Sunshine State, with top wind speeds of 155 mph recorded as planes have been upended and trees ripped out of the ground.

Governor Ron DeSantis told residents in evacuation zone’s that it was now ‘too late’ to get out and urged them to ‘hunker down’ to prepare for the storm.

Parts of Fort Myers have already been flooded, with the beach currently underwater as stronger rainfall and winds on the way.

Two people have died and more than 11 million were left without power in Cuba after the first strong winds of the powerful storm pounded its south coast late on Monday,‘according to Daily Mail.