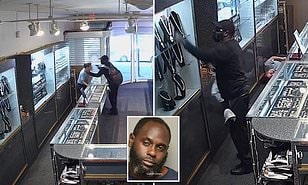 A Delaware shopkeeper was brutally pistol whipped and stomped on and left bloody and unconscious after a burglary at his jewelry shop, Your Content has learned.

Chang Suh, 68, was working at Solid Gold in Wilmington, Delaware – on September 15 when he was attacked during a 20-minute robbery.

Video footage shared by his family showed a man dressed in all black with a mask faking interest in Suh’s wares at the store.

He grabs Suh by the throat and looks to be holding a pistol to his head before slamming him with it, with the shop owner showing no resistance.

Calvin Ushery hits Suh two more times before the elderly man falls to the floor behind his store’s counter.

The thief then hops the counter and begins to stamp on Suh’s head, yet again with zero resistance.

Wilmington police arrested 39-year-old Calvin Ushery in connection with the assault on September 22,‘according to FlipBoard.