Accountant, 53, who was visiting son at Marist College Family Weekend in New York is ‘shot dead by two homeless men who were staying at the hotel’ after being caught in the crossfire of shootout in the lobby
A 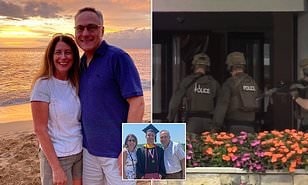 A dad who was visiting his son at a special Family Weekend at Marist College in Poughkeepsie, New York, was shot dead when he was caught in the crossfire as bullets flew in the lobby of the Courtyard by Marriott Poughkeepsie hotel where he was staying, Your Content has learned.

A father who was visiting his son at Marist College in Poughkeepsie, New York for a family weekend was fatally shot in the lobby of his hotel on Sunday morning.

Paul Kutz, 53, was caught in the crossfire of the shootout at the hotel at 7.30am.

Devin Taylor, 26, and Roy Johnson, 35, both homeless, have been named as suspects in the case and have been arrested.

Families were staying there for the annual Family Weekend at Marist.

ATF responded to the hotel on Sunday after materials ‘used to make explosives’ were found on site after the deadly shooting,‘according to New York Post.