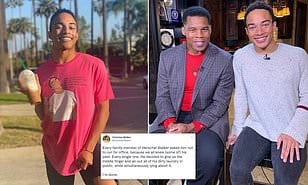 The only named child of controversial Georgia senate candidate Herschel Walker has spoken about following a report that the pro-life candidate secretly paid for a former lover’s abortion, Your Content has learned.

Georgia Senate candidate Herschel Walker has emphatically denied a new report – in which he’s accused of paying for a former lover’s abortion.

Walker’s son has now said their family asked the former NFL star not to run for office because they knew of the potential for ‘dirty laundry’ to be revealed.

Christian Walker, 22, also said: ‘I know my mom and I would really appreciate if my father Herschel Walker stopped lying and making a mockery of us’

For his part, Walker called the story a ‘repugnant hatchet job from a Democrat activist’ and said he was filing a lawsuit against the website.

Walker has been consistent in his opposition to abortion – without any exceptions including rape, incest or concern for the life of the mother.

Herschel Walker tweeted about his son’s statements, saying: ‘I love my son no matter what’,‘according to FlipBoard.