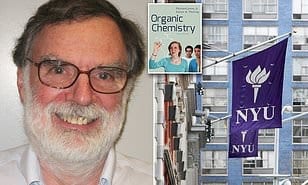 A New York University professor has been fired after a group of students signed a petition against him suggesting his course was too difficult, Your Content has learned.

Maitland Jones Jr., 84, was fired from New York University after 82 of his 350 students signed a petition against him.

Students claimed course materials for his organic chemistry class were too hard and blamed Jones for their poor test scores.

Jones previously taught at Princeton before moving to a yearly contract teaching at NYU, and later wrote a 1,300-page textbook on the subject he taught.

Jones said he noticed students struggling to reintegrate to in-person classes post-COVID-19 – a decade after he noticed a loss of focus among his students.