Paul Flores is as ‘guilty as sin’ of killing Kristin Smart 26 years ago and burying her under his deck, prosecutors argue during closing statements of his long-awaited murder trial
P 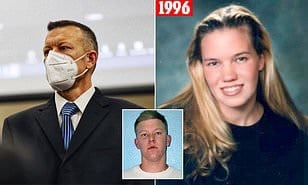 Lawyers for a California accused of the murder of a fellow student 26 years ago have claimed that the case is based entirely on rumor and speculation, without any evidence, as the long-awaited trial draws to a close, Your Content has learned.

Paul Flores, now 45, is accused of murdering Kristin Smart, 19, in 1996 while they were both students.

On Monday the jury in Flores’ trial heard from the Smart family lawyer and Flores’ attorney, who said the case was ‘conspiracy theories’

Flores’ attorney, Robert Sanger, said the case against his client was based on rumor, without any evidence of his guilt.

Earlier, Christopher Peuvrelle, arguing for the prosecution, claimed that Flores had ‘hunted’ Smart and was as ‘guilty as sin’

The defense will conclude its closing arguments on Tuesday and then the jury will begin deliberations.

Flores’ father Ruben is also on trial, in a separate case, for allegedly helping his son bury Smart’s body,‘according to Fox News.