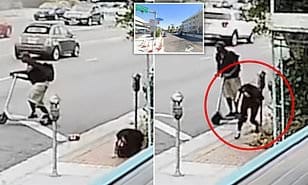 A California man was caught on camera hitting a woman in the head with a fire extinguisher in an unprovoked attack in Los Angeles on Saturday, Your Content has learned.

The unidentified woman was going out for coffee Saturday morning in West Los Angeles when she was assaulted, according to her boyfriend.

Dan Steinberg, the boyfriend, said she saw the attacker shouting as he rode past her on an e-scooter before scooting away.

Surveillance video shows the suspect returning, coming up from behind, and hurling the extinguisher at her head.

The victim fell to the ground, clutching the back of her head in obvious pain from the senseless blow.

The suspect remains at large with the LAPD still investigating and trying to gather more information,‘according to FlipBoard.