Texas womb-raider, 29, is convicted of murdering her pregnant friend, 21, by stabbing her 100 times then slashing her from hip to hip with a scalpel to steal her unborn baby girl
T 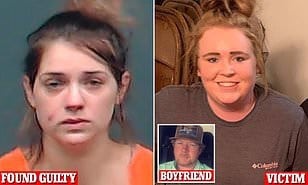 A Texas woman is facing the death penalty after being convicted of capital murder on Monday for killing a pregnant woman to take her unborn baby, Your Content has learned.

Taylor Parker, 29, has been convicted of the murder of her pregnant friend.

Reagan Simmons-Hancock was stabbed 100 times by Parker, who was attempting to steal her unborn baby – a girl called Braxlynn Sage.

The baby was cut from the womb with a scalpel, and died shortly afterward.

Reagan, 21, was killed in October 2020 after Parker spent 10 months faking her pregnancy online and to those closest to her.

Authorities claim that Parker was desperate to give her then-boyfriend Wade Griffin a child, and did not tell him she had a hysterectomy.

Parker faces the death penalty having been convicted of capital murder over the slaying of Reagan with the punishment phase scheduled to begin October 12,‘according to The Daily Mail.