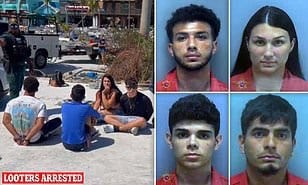 Three men and a woman have been arrested after traveling up to 50 miles to loot one of Florida’s most hard-hit areas during Hurricane Ian, Your Content has learned.

Brandon Mauricio Araya and Steve Eduardo Sanchez Araya, both 20, were also arrested for stealing from an unoccupied building during a state emergency.

All four looters were arrested on September 29 – but document reveal that they were released after posting a whopping $35,000 bond each.

The mounting death toll from Ian’s wrath currently stands at 85, and ‘ground zero’ Fort Myers is currently one of Florida’s most decimated neighborhoods as rescue teams desperately try and find survivors amid the rubble.

In a menacing warning to looters, Ron DeSantis said that Floridians would not be scared to evoke their second amendment if they caught an opportunist looter in their midst,‘according to FlipBoard.