Anger as father, 47, dies after celebrating his daughter’s ninth birthday party when GPS guided him off edge of bridge that was washed away nine years ago: Grieving family say ‘it was a totally preventable tragedy’
A 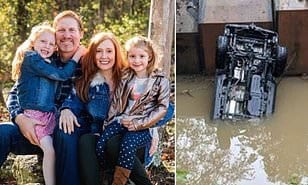 A North Carolina father of two died after his daughter’s ninth birthday party, when his GPS put him on the path of a bridge that was washed away in 2013, Your Content has learned.

A North Carolina father of two young girls died on September 30 after his Jeep plunged into a ravine where a bridge used to be.

The bridge washed away in a storm in 2013 and had not been replaced – barricades that were put up to warn drivers had been removed before the crash.

Phil Paxson, 47, was driving home from his daughter’s 9th birthday party on a rainy night when the accident occurred – his family is now searching for answers,‘according to Daily Mail.