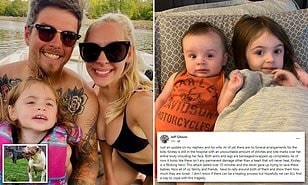 The mother of a five-month-old boy and the two-year-old girl who were mauled to death by dogs is still fighting for her life in the hospital, Your Content has learned.

Kirstie Jane Bennard, 30, has an ‘uncountable amount of stitches and bite marks over her entire body, including her face’ after she tried to save her children from a pit bull attack on Wednesday.

Relative Jeff Gibson also said that both her ‘arms and legs are bandaged/wrapped up completely,’ but didn’t think there’d be ‘any permanent damage’

She was transported to Regional One Health in ‘critical condition’ on Wednesday.

Bennard’s husband Colby was reportedly uninjured. It is not clear if he was home during the 3.30pm attack.

Eight years ago, Colby Bennard shared a photo of two pit bulls and referred to them as ‘house lions,’ although it’s unclear if these are the killer pets,‘according to INDEPENDENT.