Teacher, 30, who was stabbed to death by madman with a kitchen knife who went on Vegas Strip rampage after he was refused a photo with showgirls outside Wynn Casino
T 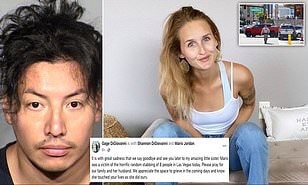 A Las Vegas elementary school teacher has been identified as one of two people stabbed to death by a madman armed a kitchen knife – who injured six others, including three showgirls, during a rampage on the city’s famous strip, Your Content has learned.

Multiple people were attacked in a mass stabbing on the Las Vegas strip at 11.45am on Thursday.

Eight people were stabbed; two were killed and three are in a critical condition in hospital.

Yoni Barrios, 32, has been charged with murder.

The two people killed have been identified as Brent Hallett, 47, and Maris Digiovanni, 30.