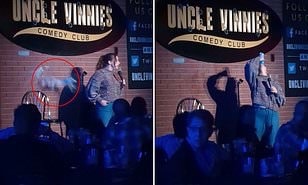 A pro-Trump heckler and her husband took their protest to a comedian’s performance a step too far when they flung a beer can at her head following a brief exchange on Saturday night, Your Content has learned.

Comedian Ariel Elias got into an exchange about Donald Trump and Joe Biden with an audience member at a show in New Jersey.

When Elias attempted to shut down the heckler and move on with her show, the woman’s husband flung a beer can at the stage, narrowly missing the comedian.

After she realized what had happened, Elias reacted by picking up the beer can and drinking the remains.

According to the club’s owners, they have identified the thrower and authorities will be pressing charges.

Comedians such as Jimmy Kimmel and Whitney Cummings took to Twitter to commend Elias to her handling of the situation,‘according to NBC.