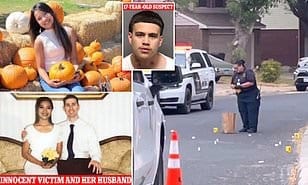 A 25-year-old woman was killed when a pair of teenagers callously blasted more than 100 bullets into the AirBnb where she was staying near Fort Worth, Texas, in a vicious drive-by shooting gone wrong, Your Content has learned.

Novita Brazil, 25, was killed instantly when the two underage gunmen opened fire on the AirBnb she was staying in near Fort Worth, Texas.

Cops said the shooting was a drive-by gone awry and that the gunmen – aged 14 and 15 – unloaded more than 100 rounds on the wrong house.

The teens then fled in their stolen car and were pursued by cops for 10 miles before finally being apprehended.

Cops said the suspects showed no remorse when they were apprehended,‘according to FLIPBOARD.