Florida man, 21, arrested after ‘shooting at homeless family of five as they slept in their car in Tampa – striking the PREGNANT mother in her head’
F 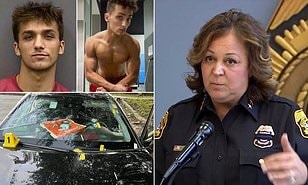 Florida police have arrested a man accused of shooting a family sleeping in their car, including a pregnant woman, Your Content has learned.

Tampa Police have arrested a man they say shot a pregnant woman in the head as she slept in a car with four other members of her family, including three kids.

Christopher Stamat Jr., 21, was taken into custody on Saturday and charged with six felonies, including attempted first-degree murder.

The homeless family of five were sleeping in their car on October 5 around 4:30am when the suspect opened fire, striking the woman in the head.

Detectives searched Stamat’s vehicle and found an empty gun box for a 9mm handgun together with shell casings that matched those at the scene.

Police said Stamat has not said why he opened fire but claimed that he felt people were ‘stalking and following him’ in cars, on bikes and walking ,‘according to The New York Post.