Parents of missing Colorado teen, 14, who vanished from school football game with two ‘sketchy older men’ say friends ‘know more than they’ve shared’ amid fears she’s been trafficked: JonBenét Ramsey’s brother tells cops to ‘get off your a**!’
P 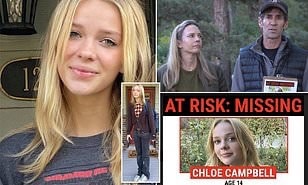 The parents of a missing 14-year-old girl are begging her friends to come forward with more information after she vanished from a high school football game with two ‘older sketchy men’ ten days ago, Your Content has learned.

Later that day she was seen looking ‘intoxicated’ on Boulder Creek trail with the same men.

She has not been in contact with her family since vanishing ten days ago.

Her parents are concerned that she is being kept against her will in another state.

Police are ‘finally’ appealing for information regarding the disappearance – eight days after she vanished.

Anyone with information should contact Boulder Police Department at 303-441-3333option 8 and reference case 22-9868 or Chloe’s full name: Chloe Campbell.