California woman, 80, is mauled to death by two hunting dogs as she went on a morning stroll – the latest in a string of deadly canine attacks
C 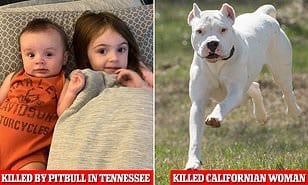 A Californian woman has been killed by two hunting dogs who ran from a nearby home to attack her while she was out for a walk, Your Content has learned.

Soon Han, 80, was found dead by the side of the road in the rural desert community of Baldy Mesa on Friday morning.

San Bernardino County’s sheriff-coroner department said that Han had been out for a walk when she was attacked by two Dogo Argentinos from a nearby home.

The dog was first bred for big-game hunting in Argentina, and is banned in the UK, Australia, New Zealand, Denmark and several other countries.

Last month an 89-year-old woman was killed in Colorado and her 12-year-old grandson severely injured when the family pitbull attacked.

On Wednesday Kirstie Bennard, 30, was severely injured and her two children – Hollace, five months, and two-year-old Lilly – were killed by their pitbull,‘according to CBS News.