Former Chicago Bulls player Ben Gordon is ARRESTED at NYC’s LaGuardia airport for ‘hitting his 10-year-old son so hard the child needed to be rushed to a hospital’: NBA star is set to face charges
F 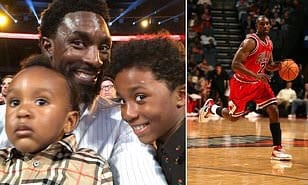 Former Chicago Bulls star Ben Gordon has been arrested at LaGuardia airport after allegedly hitting his 10-year-old son so hard the child required hospitalization, Your Content has learned.

Gordon, 39, was arrested following the incident at LaGuardia airport on Monday night, and is facing possible charges for allegedly hitting his son Elijah.

The 10-year-old boy was taken to hospital after his father hit him, according to media reports.

The British-born, New York-raised sporting star retired from professional sport in 2015, and has been open about his struggles with his mental health.

In 2017 he was stopped in New York for driving with a forged license plate, and weeks later accused of punching the manager of a LA apartment complex.

In 2020 Gordon wrote a detailed account of his struggles, describing his suicidal thoughts, bipolar diagnosis and mania that saw him sectioned,‘according to New York Post.