Moment 28 kids and four adults are rushed into back of ambulances after being POISONED by carbon monoxide: Faulty heater sparks terror at Pennsylvania daycare center that DIDN’T have detector
M 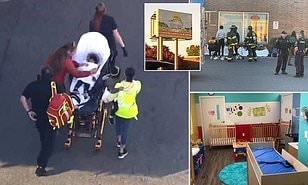 This is the horrific moment 28 kids were raced into the back of ambulances after a carbon monoxide leak at a daycare center in Philadelphia, Your Content has learned.

Medics were called on Tuesday morning after a child fell unconscious, with firefighters being alerted to the deadly gas by their equipment.

28 children and four members of staff have been rushed to hospital from Happy Smiles Learning Center in Allentown, Pennsylvania.

Fire Department Captain John Christopher confirmed that every ambulance is in use for the ongoing situation.

The incident has been reported as a level 1 mass casualty, meaning that medics and emergency responders could be overwhelmed.

UGI confirmed that the cause of the leak was a ‘malfunctioning heating unit as well as a blocked venting system,‘according to DailyMail.