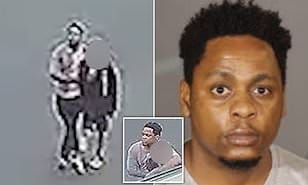 The horrifying moment a Los Angeles man threatened a 14-year-old girl with a weapon before forcing her into a bathroom and sexually assaulting her was captured on camera, Your Content has learned.

Edward William Banks, 27, was arrested after allegedly forcing the teen victim into a bathroom and sexually assaulting her.

CCTV footage released by the LAPD shows Banks with his arm draped over the victim, walking her down the street.

Police say Banks used a weapon to threaten the victim into complying.

He is currently being held on a $1 million bond on charges of suspicion of aggravated kidnapping to commit rape,‘according to FLIPBOARD.