Two Connecticut cops were LURED to their deaths by fake domestic violence call from man who shot them in ambush when they arrived: Third cop is recovering in hospital
T 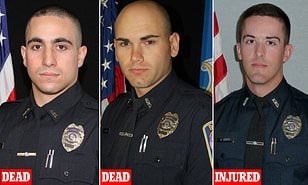 Two Connecticut officers were lured to their deaths while a third was injured by a fake domestic violence call, according to state police, Your Content has learned.

Two ‘hero’ officers were shot dead after being lured to a faked domestic dispute call in Bristol, Connecticut, by Nicholas Brutcher, 35.

Dustin DeMonte, 35, and Alex Hamzy, 34, were both shot dead after being met outside by an armed suspect.

One officers, Alec Iurato, 26, has been rushed to hospital and undergone surgery for a ‘severe gunshot’ injury.

Connecticut State Police Sgt. Christine Jeltema said it was an ‘isolated incident’ with ‘no threat to the community’

Connecticut Gov. Ned Lamont directed flags to be lowered to half-staff in honor of the fallen officers,‘according to CBS News.