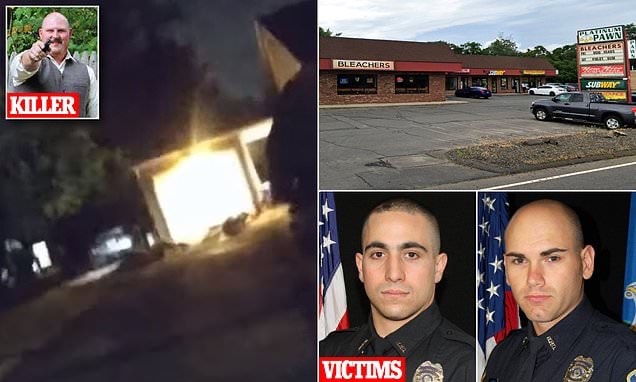 The man who murdered two cops after luring them to his home with a fake 911 call allegedly interacted with officers at a local bar earlier that night, Your Content has learned.

Nicholas Brutcher interacted with local police at Bleachers Bar in Bristol, Connecticut, earlier in the same night that he murdered two officers.

It remains unclear the nature of Brutcher’s interaction with the cops at the bar, but previous reports said he had been kicked out of a bar that same evening.

Connecticut police released body-cam footage of the moment Officer Alec Iurato, 26, killed a man who murdered two cops at his home on Wednesday.

Brutcher opened fire on Iurato and Officers Dustin DeMonte, 35, and Alex Hamzy, 34, after luring them to his home with a fake 911 call.

Once the officers arrived, Brutcher fire more than 80 rounds at them, killing DeMonte and Hamzy and wounding Iurato.

Iurato was able to run for cover, and after finding a vantage point was able to kill Brutcher with a single gun shot,‘according to Daily Mail.