Homeless woman ‘who boasted about selling body parts’ is charged with raping, torturing and murdering 12-year-old Lola after the girl was found stuffed in a suitcase in Paris with numbers 1 and 0 ‘placed’ on her corpse
H 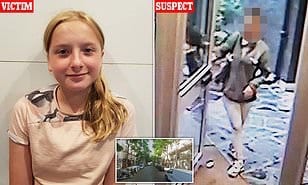 A homeless woman who ‘boasted about selling body parts’ has been charged with the murder, rape and torture of a 12-year-old girl whose throat was slit before her mutilated body was stuffed in a suitcase in Paris, Your Content has learned.

Body of Lola Daviet, 12, was found tied up in a suitcase in Paris on Friday showing signs of torture.

Dahbia B, 24, has been charged with her murder, rape and torture after the gruesome killing.

Man, 43, remains in custody after allegedly providing a car to the suspect.

The victim was discovered with her feet and wrists bound, tape over her mouth and several cuts to her throat.

Numbers were also found on her body – not written or cut but ‘placed’ on her by a ‘device’, French media said.

The girl’s body was found at 11.30pm Friday night just hours after she was reported missing by her mother,‘according to The SUN.