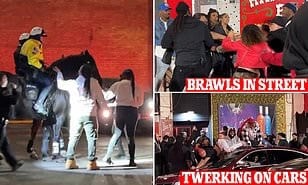 Shocking video posted online lays bare just how crime-ridden downtown Democrat-led Minneapolis has become, with a police horse harassed and sworn at, people brawling, and illegal street races happening near where rowdy women twerked on top of cars, Your Content has learned.

One man was assaulted in the street and a wild fight broke out between a group of girls outside the bar.

When police tried to break up the fight, the women cursed out the police horse.

The city has been reeling from a crime wave since George Floyd was murdered in May 2020, with riots common throughout the city.

Residents are now taking matters into their own hands,‘according to US Today.