Georgia college student, 21, is killed instantly by propeller blade in front of his DATE after renting Cessna plane to fly her to dinner in Savannah
G 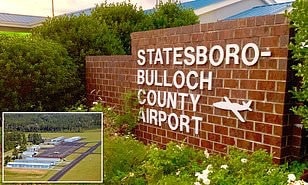 A student in Georgia was killed on Sunday when he walked into the propeller of a Cessna plane and was struck twice in the head after using the aircraft for a date, Your Content has learned.

Sani Aliyu, 21, was killed Sunday night when he was struck twice in the head by the propeller of a small plane at Statesboro-Bulloch County Airport in Georgia.

Aliyu, a sophomore at Georgia Southern University, reportedly rented the plane to take a woman on a date to Savannah.

The incident occurred when the two exited the plane and the woman walked to the back while Aliyu walked to the front and was hit by the propeller.

Capt. Todd Hutchens of the Bulloch County Sheriff’s Office said ‘Nobody is really at fault or anything,‘according to FLIPBOARD.