Quinton Simon’s mom is stripped of her other two kids after being named a suspect in presumed death of missing Georgia toddler: Court documents say she’s hooked on cocaine and cannabis
Q 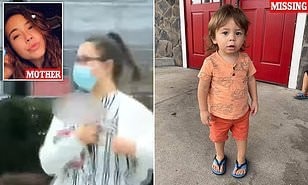 The mother of a missing one-year-old boy had previously admitted to using drugs while pregnant, court documents show – as authorities remove her two other children from their grandmother’s custody, Your Content has learned.

Court documents describe how Leilani Simon, 22, is a ‘chronic, unrehabilitated substance abuser of cocaine and cannabis.

She allegedly admitted to using cocaine and tested positive for the drug at the birth of one of her three children.

She is now the prime suspect in the disappearance and presumed death of her 1-year-old son, Quinton.

Child Protective Services removed her two other children from her mother’s custody on October 12,‘according to Daily Mail.