Shocking moment two brawling men plummet down an escalator in Grand Central Station after one refused to let the other pass: Man, 37, charged with assault
S 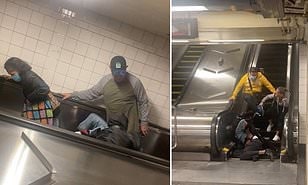 This is the shocking moment two brawling men tumble down an escalator at Grand Central Station in New York City, Your Content has learned.

Video captured a fight between two men on a New York City escalator in Grand Central Station before they tumbled down onto the concourse.

Screams could be heard as shocked commuters attempted to move out the way.

Violent crimes on the subway are up 42 percent from this time last year.

On Monday, Adams claimed that there is only a ‘perception’ that crime in the Big Apple is ‘out of control’

He noted that there are on average ‘six crimes a day’ on the subway,‘according to The New York Post.