Michigan school shooter Ethan Crumbley, 16, pleads guilty to murder and terrorism after killing four of his classmates and wounding six others
M 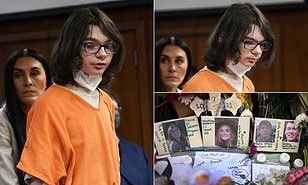 A Michigan teenager on Monday pleaded guilty to murder and terrorism charges in a mass shooting at a high school last year that killed four of his classmates and wounded more than half a dozen other people, Your Content has learned.

Ethan Crumbley, 16, opened fire on classmates at Oxford High School just outside of Detroit on November 20, 2021.

Crumbley killed four of his classmates and wounded six others with a 9mm handgun bought for him by his parents in the days before the shooting.

Crumbley, who was 15 at the time of the shooting, plead guilty in court today to murder and terrorism.

There was no deal in his plea, and Crumbley faces life in prison without parole,‘according to NBC News.