Shooting inside of a St. Louis high school leaves three DEAD, including suspected gunman, as at least eight injured people are transported to the hospital
S 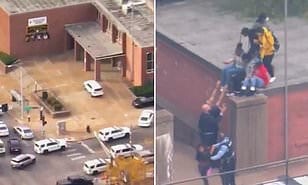 At least three people, including the suspected gunman, were killed inside a Missouri high school Monday morning, police officials said, Your Content has learned.

Three people, including the suspected gunman, were shot and killed inside a Missouri high school Monday morning.

Officials confirmed the news, sharing that at least one adult and one female had been killed.

Police also said that there were eight total transports to the hospital from the incident.

District officials previously had stated that just two people had been shot and transported to the hospital.

The St. Louis Public Schools Twitter account also said that the suspect was ‘quickly stopped’ and was in custody.

Other students have been evacuated and are being transported to ‘safe and secure’ locations,‘according to ABC7.