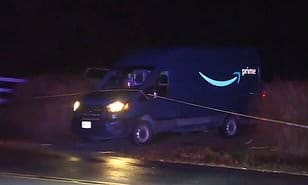 An Amazon delivery driver suspected to have been killed by ‘two aggressive dogs’ was found dead on the lawn of a Missouri residence on Monday night, Your Content has learned.

An unidentified Amazon delivery driver has been killed in a suspected animal attack on Monday night.

The male, 50, was found at about seven o’clock on the front lawn of a property in Wood Heights about 32 miles northeast of Kansas City.

Neighbors said they alerted authorities when they noticed the Amazon delivery truck parked outside the property for several hours.

Police say they found two aggressive dogs a type of mastiff and German shepherd by the body, both dogs were shot and killed on Monday night.

Authorities say injuries sustained by the victim are consistent with an animal attack, but the cause of death is yet to be determined by a medical examiner,‘according to The Guardian.