Quinton Simon’s mom sobs as she reveals she’s become prisoner in her own home after being named prime suspect in the Georgia boy’s disappearance: Protesters wave ‘Baby Killer’ signs outside
Q 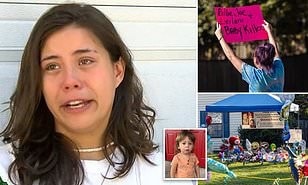 Quinton Simon’s mom has sobbed as she revealed she has become a prisoner in her own home after being named the prime suspect in her son’s disappearance, Your Content has learned.

Leilani Simon, 22, denied on Monday that she is hiding from authorities as she remains the prime suspect in the death of her 18-month-old son Quinton.

She said she has had to barricade herself inside her home to hide from protesters who have gathered outside the Savannah residence at all hours.

Some of the protesters have been harassing her, she said, leaving signs like ‘Baby Killer’ on a memorial she set up outside for her son.

Four protesters were arrested over the weekend for blocking her driveway and banging on her doors and windows,‘according to New York Post.