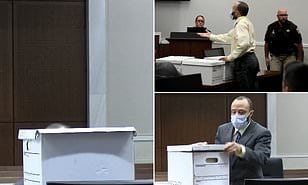 A Wisconsin man who is standing trial for allegedly plowing his SUV through a crowd at a Christmasparade in Waukesha killing six people was kicked out of court yet again for his erratic behavior, Your Content has learned.

Darrell Brooks, 40, allegedly plowed through the crowd at a Christmas parade in Waukesha, Wisconsin on November 21, 2021, killing six people.

Brooks was removed from the courtroom on Monday after many interruptions.

He was banned to a separate courtroom where he was he proceeded to build a fort with boxes, shielding himself from the camera.

The accused killer elected to represent himself in his trial and repeated interruptions, outbursts, and erratic behavior have led to multiple banishments.

Judge Jennifer Dorow admitted she was frightened of his behavior,‘according to FLIPBOARD.