Colorado security guard, 35, killed boss, 52, by shooting him in the FACE after his name was misspelt on $165 paycheck and he couldn’t cash it, cops say
C 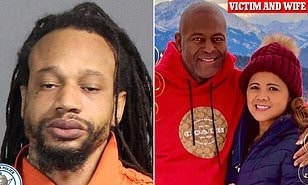 A security guard allegedly shot his boss in the face and killed him because his name was misspelt on a paycheck for $165, leaving him unable to cash it, Your Content has learned.

Lloyd Love Jr allegedly shot Marvin Johnson in the face in a row about the check.

He was charged with murder but has refused to leave his cell to appear in court.

Johnson’s wife branded Love the ‘devil’, while his daughter paid a moving tribute.

Love had only worked for the couple for a few days before the alleged murder,‘according to FOX31.