St Louis school shooter who was armed with AR-15 and 600 ROUNDS of ammunition before he killed student, 16, and teacher – and left chilling note describing himself as a loner
S 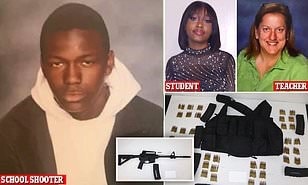 The accused St. Louis school shooter left a chilling note describing himself as a loner before making his way through the building’s locked door and killing a student and teacher, Your Content has learned.

Orlando Harris, 19, left a note describing himself as a loner before the shooting.

He allegedly brought over 600 rounds of ammunition to the St. Louis school.

He added he wanted to be the next national school shooter in a note, cops said.

A video shows the harrowing moments as students rushed to escape the school,‘according to NBC NEWS.