Halloween horror as kids aged 3, 11 and 13 are among 14 shot and injured in bloody drive-by shooting during balloon release at vigil in Chicago
H 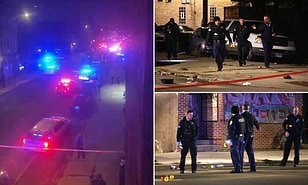 Three children were among 14 people shot during a bloody Halloween drive-by shooting at a vigil in Chicago, Your Content has learned. 

The children, aged three, 11 and 13, were rushed to hospital after bloody attack.

Eleven others, aged from their 30s to their 50s were also struck by the bullets.

The group was attending a vigil on the corner around 9.30pm in the west side.

The sickening attack marked a night of bloodshed across the US as families celebrated Halloween,‘according to ABC7.