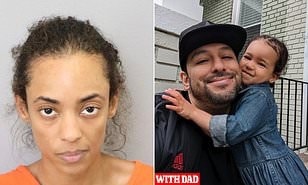 A Washington DC mother, who fled to Virginia with her two-year-old daughter after losing a custody battle, has been charged with murder, Your Content has learned.

Leandra Andrade, 38, is currently being held without bail on second-degree murder charges in Virginia Beach after her daughter was found dead.

Lanoix Andrade, two, was pronounced dead inside the Cutty Sark motel on August 1 next to her unconscious mother, who was given Narcan.

The medical examiner’s office has ruled the toddler’s died from an ‘acute diphenhydramine toxicity,’ with is commonly known as Benadryl.

The two were found at the hotel after Andrade texted a friend to say she would ‘look down on them from heaven’ and spoke about her daughter in past tense.

Andrade had fled Washington DC after losing a custody battle with the child’s father Fabio E. Andrade, Jr., who was given full legal custody.

The pair still shared physical custody when Andrade took off with Lanoix,‘according to FLIPBOARD.