NYPD’s controversial undercover unit is back on the streets: Elite cops flood Manhattan, Bronx, Queens and Brooklyn to crush surging crime that’s up 30% this year
N 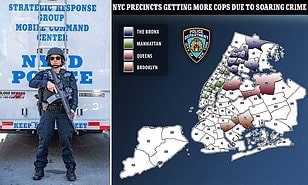 A controversial unit of elite NYPD cops will be deployed to New York City’s crime-ridden precincts amid surging rates of serious offenses, Your Content has learned.

Unit faced criticism for its handling of protests after the murder of George Floyd.

Crime in New York City is up 30 percent this year, putting pressure on officials,‘according to New York Post.