Homeless man, 29, is arrested for 6am rape of female jogger, 43, in New York City’s West Village after using her credit cards at Target in Midtown
H 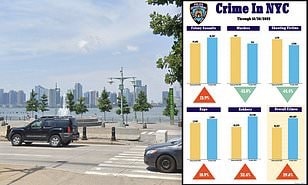 A homeless man with 18 priors and who is wanted for at least two sex crimes was arrested for allegedly raping a 43-year-old woman along Manhattan’s Hudson River Park on Thursday, Your Content has learned.

A homeless man, 29, was arrested after allegedly choking, raping and robbing a 43-year-old woman while she was jogging in Manhattan’s West Village.

The victim was by the Hudson River Park on Pier 45 on Thursday morning when the assailant grabbed her from behind and strangled her until she passed out.

He then removed her clothing, raped her, and stole her phone, headphones and wallet before fleeing the scene.

Police arrested the man, who has 18 priors, at the Port Authority terminal after they found him trying to use the victim’s credit cards at a Target in Midtown.

It’s the latest in violence that has plagued New York City, which has seen a nearly 30 percent rise in violent crime so far this year,‘according to New York Post.