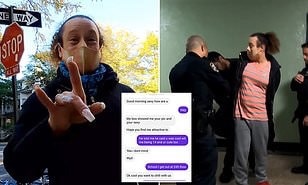 A prominent New York City transgender and HIV activist has been arrested and charged for allegedly soliciting a minor on Grindr and asking him for oral sex, Your Content has learned.

Lailani Muniz, 39, a prominent New York City transgender and HIV activist, was arrested and charged for allegedly soliciting a minor.

Muniz is accused of asking for sex from a 14-year-old boy on Grindr, who was actually a man working with the NY Creeps Spotlight nonprofit.

The chat log shows Muniz promising to meet the minor while his mother is away, inviting him to a naked jacuzzi party with weed and ecstasy.

Muniz agreed to meet up with ‘Josh,’ but was instead confronted by the nonprofit, who called the police,‘according to DailyMail.