Owner of A-list favorite Moonshadows and his son, 13, are killed in fiery Mulholland Drive crash after 21-year-old rear-ended their vintage Mustang: Suspected drunk driver is charged with double homicide and held on $4m bond
O 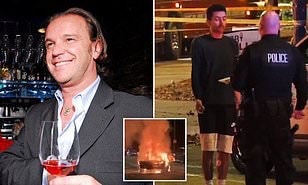 The owner of an oceanfront Malibu restaurant frequented by A-list celebrities and his son have been killed in a fiery high-speed crash after a 21-year-old suspected drunk driver rear-ended their vintage Mustang, Your Content has learned.

Andrea Bullo, 60, the owner of Moonshadows Malibu, and his son, Marco, were pronounced dead on the scene of a fiery high-speed collision in Woodland Hills Tuesday night.

Both cars immediately burst into flames, with video showing the front of Gonzalez’s Toyota Camry mangled in the aftermath, while the Mustang was completely engulfed in a fire.

Gonzalez was able to escape with only minor injuries and was filmed on the scene getting a sobriety test.

He is now charged with two counts of homicide and is being held on a $4million bond,‘according to FLIPBOARD.