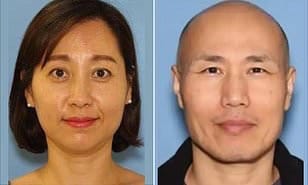 A woman who was bound and gagged by her estranged husband could be heard screaming for help in a newly-released 911 call she was able to make on her Apple Watch before she was buried alive, Your Content has learned.

Young Sook An, 42, could be heard making muffled screams in a desperate attempt to get help after she was hogtied and gagged by her ex-husband.

A dispatcher realized she was in danger and sent authorities to the scene.

But by the time police got to the house in suburban Washington, Chae Kyong An, 53, had already driven off to the woods where he would bury her alive.

Authorities say Chae broke her Apple Watch, stabbed her and buried her in a 19-inch deep grave over a dispute about their divorce and finances.