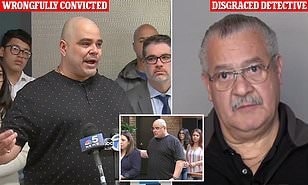 A Chicago man who was exonerated after he was wrongfully imprisoned for a 1991 murder he did not commit is now suing the city and detectives for framing him, Your Content has learned.

Daniel Rodriguez spent 17 years behind bars after he was convicted in the 1991 shooting death of Jose ‘Junito’ Hernandez, Jr.

On Monday, he filed a civil suit against the city of Chicago, Guevara, and several other detectives involved in the case,‘according to FlipBoard.